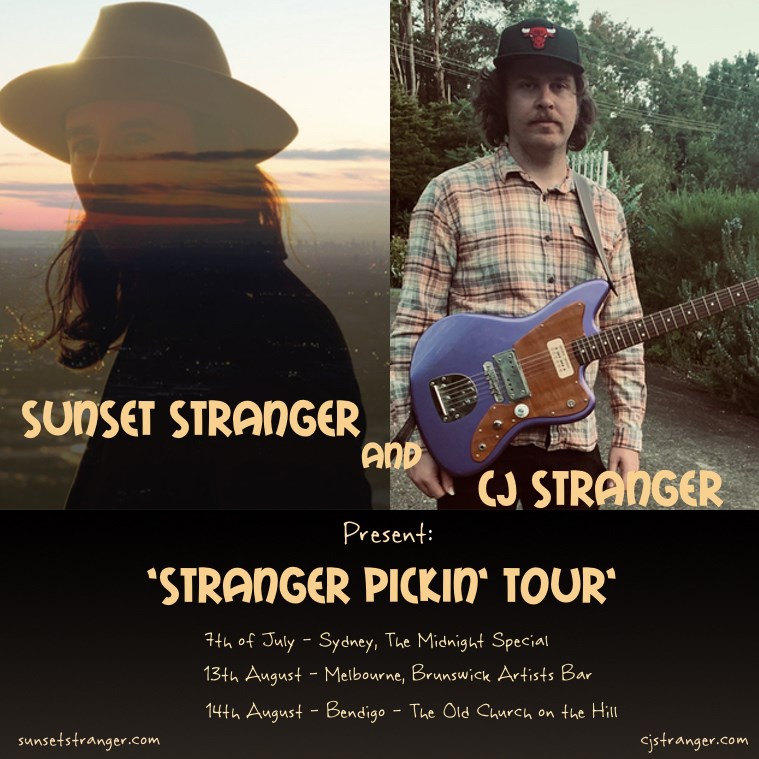 Two songsmiths… two pickers… two Strangers unite for a series of intimate shows in 2021. It was in the strange year of 2020 that these two crossed paths… the Victorian ‘Sunset Stranger’ and the New South Welshman ‘CJ Stranger’ found their albums next to each other on an alt-country albums of the year list by Post To Wire blog. Drawn in by a curiosity about the other, the two made contact and thus decided it was inevitable that a Stranger Tour should occur once touring was allowed again… Thus this July and August you can catch these two Strangers playing shows together around Victoria and NSW. Be sure to get along and witness some of the best songs n’ guit-pickn’ this country has to offer….

CJ Stranger is rapidly carving out a distinctive place in the Australian music landscape with his unique blend of alt-country and indie rock. His 2020 album ‘Hey Stranger’ received critical acclaim and cemented CJ’s spot as one of Australia’s strongest emerging songwriters. This alter-ego of Blue Mountains guitarist Cameron James Henderson demonstrates an unexpected command over lyricism, exploring stream-of-consciousness imagery in songs like ‘Strange One’ contrasted with deep narrative maturity in folk ballad ‘Fool’s Gold’. All delivered with an understated voice backed by expertly crafted arrangements leading to inevitable comparisons with Wilco, Kurt Vile, Paul Kelly and The Church.

Sunset Stranger is the alt-country project of Melbourne guitar picker and songwriter Stephen E. Stanisic, who has previously released music under the name Eddie Nuardo. His music draws inspiration from the storytelling traditions of country, folk and blues, Folk Revival and American fingerstyle guitarists, and the cosmic country songwriters of the 60’s and 70’s.Music blog Post to Wire has described his sound as “that sweet spot between country and folk, in the similar realm to David Rawlings and Willie Watson,” and called his new album “one of the finest Australian Americana releases of 2020.”

Doors open at 7pm for a 7:30pm start – hit the ticketing link to assure your seat!

The Old Church on the Hill is located on the corner of Harkness and Russell Streets, Quarry Hill, Bendigo.
The Singer/Songwriter Showcase events, staged at the Old Church by the Bendigo Blues & Roots Music Festival crew on a semi-regular basis, are an opportunity to enjoy a House Concert vibe in a public venue. The door charge is kept as low as possible to ensure accessibility. Under 12s free and, although drinks are available for sale, the focus is on THE MUSIC. If your conversation is more important to you than other people’s enjoyment of the artists’ performance, please take it outside. (Thanks.)
Proceeds from drink sales go to supporting the Old Church crew and their many worthy initiatives.
We look forward to your company for an intimate concert experience like you’ve likely never experienced before.