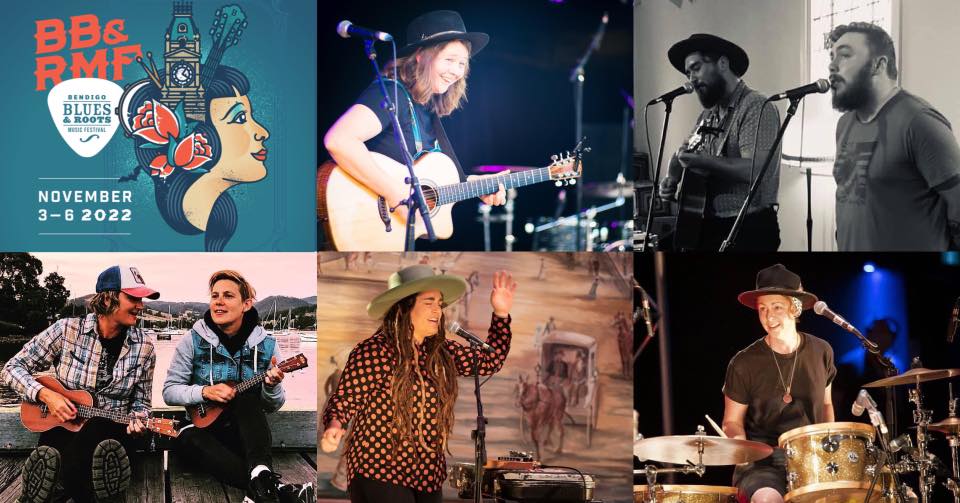 A magnificent line-up will grace the stage at The Old Church on the Hill on Sunday 6 November from 1pm, as part of Bendigo ﻿Blues & Roots Music Festival #10.

﻿This Way North: ﻿Full of rapturous nostalgia, This Way North’s music takes you from moody, tremolo-tinged heart-tuggers to pounding driving alt-psych rock through a sonic landscape of reverb-soaked guitars and rolling rhythms. With odes to 90’s rock sitting on air-tight grooves and full, cinematic spaciousness, This Way North’s music is a portal to summer festivals, their love affair with the road, and an open invitation to turn up the volume and let loose.

﻿Tuckshop Ladies: ﻿The triceps ain’t what they used to be but the funny bone has only gotten sharper… The Tuck Shop Ladies are an amalgamation of Australian folk music darlings Sam Lohs (Fruit) and Rosie Burgess (Rosie Burgess Trio). Strapping on a pair of ukuleles, the pair pull back the curtain to share an intimate selection of the often ridiculous, but always harmonious songs that were birthed in the back of a tour van, to amuse only themselves.
Their live show is an insight into the relationship of touring musicians, and the result of what happens when every day life is a Broadway musical. The Tuck Shop Ladies invite you into their hilarious world and leave you wanting to run away with the band.
Since forming in February 2019 this duo has been quickly gathering acclaim at festivals and shows across the country.

﻿Grim Fawkner & Alister Turrill: ﻿Rambling man, Grim Fawkner, is no stranger to stages and streets across the globe and at home. The epitome of the itinerant musician, he draws together tales and musings from his travels and is as likely to deliver them in soft ballad form as he is face-meltingly intricate and upbeat roots/country/blues. ﻿It would be a generalisation to group Alister Turrill with other young roots players. His playing style blends a true form of blues with complex songwriting seldom seen. Together Fawkner and Turrill weave a rich tapestry of gutsy blues and folk inspired sounds. ﻿Raw, real and powerful.

﻿Mandy Connell: ﻿Connell’s songwriting is unmistakable. With fabulous assessments from Judy Small, Paul Brady, Eric Bogle and others, it’s easy to see why the Aussie folk singer is well recognised on the festival circuit. Winner of the Declan Affley and Maldon Minstrel Awards, Connell fronted popular trad band Stray Hens for several years, and continues her solo work between collaborations with artists like Layla Fibbins, Khristian Mizzi, Liz Stringer and Sally Dastey (Tiddas), on the fascinating YouTube series, An Otherwise Quiet Room. Connell comes from an old folk tradition, and writes what she sees. Songs about home and gardening sit amongst lyrics with political themes, and fingerstyle guitar is augmented with blues influence and most of all, the woman’s unwavering command of the stage. A show from Connell invites everyone in the audience to share the moment with her, be her confidant, be her friend in trouble and to celebrate her joy with her.
﻿
About the venue…﻿

The Old Church on the Hill is located on the corner of Harkness and Russell Streets, Quarry Hill, Bendigo.
The Singer/Songwriter Showcase events, staged at the Old Church by the Bendigo Blues & Roots Music Festival crew on a semi-regular basis, are an opportunity to enjoy a House Concert vibe in a public venue. The door charge is kept as low as possible to ensure accessibility to all. Under 12s free and, although drinks are available for sale, the focus is on THE MUSIC. If your conversation is more important to you than other people’s enjoyment of the artists’ performance, please take it outside. (Thanks.)
Proceeds from drink sales go to supporting the Old Church crew and their many worthy initiatives.
We look forward to your company for an intimate concert experience like you’ve likely never experienced before.